Abby Hammes, a paralegal at O’Keeffe O’Brien Lyson Attorneys, recently spent several days in days in Washington, D.C. as part of the MN/ND/SD Chapter of the ALS Association. Abby’s mother, Renee Bernier, was diagnosed with ALS in 2015 and passed away from complications of the disease in December 2017. The average life expectancy after diagnosis of ALS is 2 to 5 years.

Abby and her fellow chapter members took part in the ALS Public Policy Conference and Advocacy Day. They were involved in sessions May 13th and 14th hearing presentations and panel discussions led by researchers, ALS experts and congressional staffers, all of whom discussed recent changes and progress made in ALS

Abby, along with a Carrington man currently living with ALS, Eric Hewitt, and his brother, Kent Hewitt, also met with staffers of Senators Heitkamp and Hoeven and Representative Cramer, asking for their continued support for appropriations for ALS research and for government program development to support those people living with ALS and their families.

Established in 1985, the ALS Association is the only national non-profit organization fighting Lou Gehrig’s Disease on every front. The association leads the way in research, care services, public education and public policy – giving help and hope to those facing the disease. 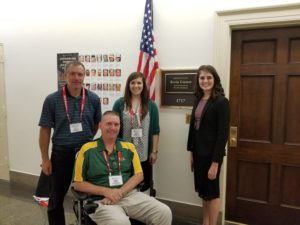 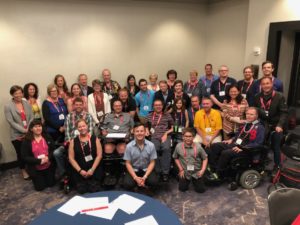