Ways to Determine Who was at Fault in an Auto Accident

The process of sorting out who was at fault in an auto accident is not usually easy, but is extremely important to everyone involved for one basic reason: establishing liability.

Generally, the at-fault driver must pay for all the damages, but it is ultimately the drivers’ insurance companies who assert claims for damages and make the final determination as to liability. There are five factors typically considered when determining fault in an auto accident: 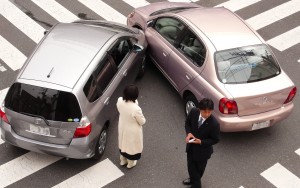 The damage on the vehicles can also be used to prove fault. In almost all situations, if a driver hits another vehicle from behind, he will be considered at fault. Similarly, a driver making a left turn is often blamed for any collisions resulting from his turn. If someone runs a red light, that driver may hit another car broadside and be blamed for the accident, since the other driver was simply proceeding through the intersection on a green light.

If one driver apologizes to another after the accident, saying something like “I’m sorry I hit you,” or “I didn’t see you,” and this admission is documented on the accident report or insurance investigation, chances are that driver will get most or all of the blame for the accident.

Were There Any Witnesses?

Most of the time, drivers will not admit fault, and witnesses will be called upon to give their opinion regarding liability. Police officers and insurance claims representatives will often take the names and phone numbers of any witnesses at the scene, and contact them immediately or at a later date to ask them to give their account of the accident.

Negligence of Either Party

If a driver ran a stop sign or cut another driver off, this carelessness could constitute negligence and require them to reimburse another driver for damaged caused in an accident.

Being held liable for an auto accident has many negative consequences for a driver, including paying for someone else’s property damage and medical bills as well as their own higher insurance rates.

If you were injured in an automobile accident due to another driver’s negligence, contact a personal injury lawyer at O’Keeffe O’Brien Lyson Attorneys online or call 701-235-8000 or 877-235-8002 (toll-free) today.