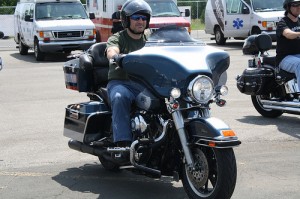 “Riding a motorcycle on today’s highways, you have to ride in a very defensive manner. You have to be a good rider and you have to have both hands and both feet on the controls at all times.” – Evil Knievel.

Even the world’s most noted motorcycle daredevil cautions motorcyclists to be careful while out on the roads. The thrill of driving down the road, feeling the wind and sunshine is an experience like no other, but unfortunately accidents can happen, even to the best, most experienced riders.

As with any accident the first and most important thing to do is to check to ensure all parties involved are safe from harm. If needed call 911, or have someone call for medical services immediately. Also, if there aren’t any evident injuries, that doesn’t mean that there aren’t potential internal injuries to deal with after the adrenaline is gone. If you refuse medical treatment now, and find injuries later on, insurance companies may try to deny your claim.

To prove it wasn’t your fault (if it wasn’t), clear evidence must be gathered from the crash. Evidence can include skid marks, witnesses, photos of the crash site, proof of injuries, damage to vehicles, any video from nearby cameras, and police reports. When put together, it can lay out a better picture of what happened and why.

Once all of that has been dealt with, you should contact your insurance carrier, no matter who is at fault and no matter what your intentions are.

Recovering from the Accident

Motorcyclists injured in a crash can suffer injuries that require expensive procedures and care. Sometimes, these individuals are injured to an extent where they are unable to work for some time. Monetary compensation may be available for victims in certain circumstances.

With car insurance, you have no fault coverage, which will cover your medical bills and lost wages from an accident no matter who is at fault ($30,000 in North Dakota and $40,000 in Minnesota). But most motorcycle policies don’t have that protection for their drivers, however some have a medical pay policy that will help assist with pay bills. Because of this, it is important to speak with an attorney after an accident to figure out what type of coverage you have, and who (if anyone) can assist you in paying the bill and lost wages you incur after being injured in a motorcycle accident.

Even if you don’t have an interest in pursuing a lawsuit, it is still a good idea to talk to a lawyer to make sure that your rights are protected and paperwork is handled properly.