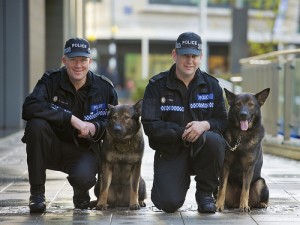 In Fargo, there are many residents who live in apartment buildings throughout the community. Recently, there was a case in in which a man residing in an apartment had his rights violated, which resulted in a Fargo Judge throwing out the evidence finding it was illegally obtained. Furthermore, the judge ruled that defense attorneys revisit cases where drug-sniffing dogs were used.

We’ll break down the case that caused it all, and explain what it means for attorneys, apartment dwellers and the police.

On December 9, Detective Aberle with the narcotics unit and Sergeant Vinson with the canine unit were assigned to follow up on a number of reports that had been made, including the report at the location cited on November 8. There were many locations, and at each listed location, there was reason to suspect that controlled substances were being used or possessed, but there was insufficient information for a search warrant.

Aberle and Vinson were able to enter the secured apartment by catching the locked door while a woman was exiting the apartment. The officers then took the drug dog through the building. The reported odor was detected on the second floor, but there were individuals in the hallway. The trio went to the third floor to wait for the hallway to clear.

The dog, Earl, alerted to unit 214, and the officers used this information to obtain a search warrant. Once retrieving the warrant, they entered the unit and found several ounces of marijuana, paraphernalia, money and related items.

The Constitution of North Dakota guarantees the right of all people to be secure against unreasonable searches and seizures. This language is identical to the language found in the Fourth Amendment to the United States Constitution.

The officers entered the secured building without pushing buzzers to announce their presence or gain actual permission to enter. They just entered by slipping through.

Furthermore, instead of alerting the resident who lived in unit 214 when the dog identified the unit, they snuck out of the building and used the alert to obtain a warrant. The use of trained canines to explore and investigate the contents of a home or its immediate surroundings, like an apartment hallway, is considered a search.

Because drug dog was used to conduct a search of a residence without a warrant, and hallways of apartment buildings are private and secured, the officers performed an illegal search.

Due to this fact, Judge Wickham Corwin threw out evidence collected at the home of an alleged drug dealer. His decision to suppress the evidence was based on a recent U.S. Supreme Court ruling that held police can’t use a dog to detect the smell of drugs from outside a home without a warrant.

Pat Claus, Deputy Police Chief says that a handful of cases may likely return to court following this ruling.

For future drug cases, officers will have to be sure to have a warrant before using the assistance of a drug-sniffing dog.