The oil boom in North Dakota has brought in an influx of people to the western part of the state, but it has also brought an increase in truck traffic throughout the state, as well. This increased level of trucking in the Bakken has  created a jump in semi-truck related accidents with drivers and pedestrians injured or killed by the incident.

In the last 10 years, North Dakota’s fatality rate has been significantly higher than the national fatality rate. In 2014 alone, North Dakota saw 122 fatal car crashes and 136 fatalities with 248 total crashes occurring in work zones. The state has recognized this problem and has dedicated 450 million dollars into improving road conditions. 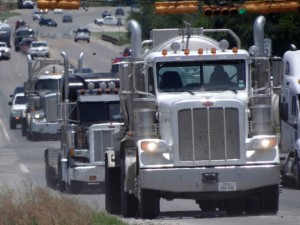 Statistics from the N.D. Department of Transportation 2013 Crash Summary:

Tips for Driving Safely Around Trucks

Just like anyone else on the road there are both great truck drivers, as well as bad ones. Take safety into your own hands and know what to do when passing a large truck.

Having an accident with commercial trucks almost always leads to injuries. If you or someone you know has been seriously injured or killed in a trucking related accident, contact O’Keeffe O’Brien Lyson Foss Attorneys to seek out legal help and services.

Don’t forget to drive safely and call the North Dakota Travel Information hotline for road and traffic conditions before traveling through areas with heavy truck traffic.